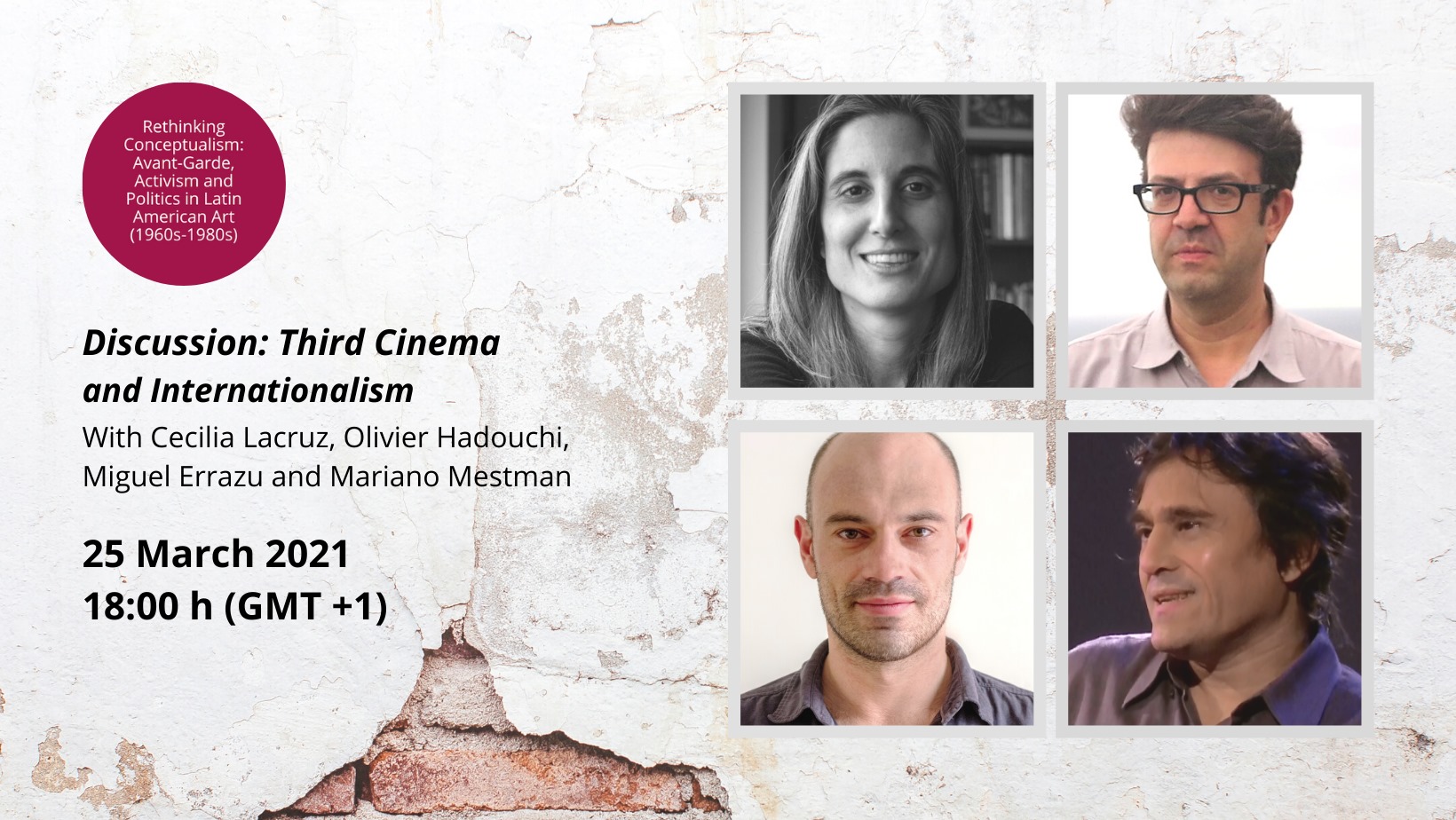 Discussion within the framework of the Online Symposium “Rethinking Conceptualism: Avant-Garde, Activism and Politics in Latin American Art (1960s-1980s)”

The term “Third Cinema” was coined by Fernando Solanas and Octavio Getino, key figures of the Argentine political filmmaking movement Grupo Cine Liberación. Understood as a type of cinema which aimed for political and cultural decolonisation, it differentiated itself from First Cinema (Hollywood) and Second Cinema (European cinema d’auteur) of the 1960s and 1970s. The discussion will give different perspectives on how New Latin American Cinema developed especially in Uruguay, Argentina and Mexico.

The discussion will be held in Spanish via Zoom.
Tickets are free of charge and available via Eventbrite

The symposium lectures of all discussants were recorded in advance and are freely available during the month of March. We recommend to watch the videos on the project’s YouTube channel before the Zoom meeting:

In her presentation, Cecilia Lacruz takes the image of a man holding a camera as a weapon, an illustration by Uruguayan drawer Paco Laurenzo from 1969, as a basis for her argumentation. She analyses its circulation and how it became the symbol of political cinema.

Olivier Hadouchi will give a comment on Third Cinema in Latin America, taking as a basis his research on how Third Cinema evolved different latitudes and the networks around it, including the Tricontinental Conference (held in Havana in January 1966) that gave birth to the OSPAAAL (the Organization of Solidarity with the People of Africa, Asia and Latin America), an organisation that established relations of solidarity between the countries and revolutionary movements of the three Third World continents.

In his lecture, Miguel Errazu speaks about the role played by the CUEC-UNAM (University Centre for Film Studies at the Autonomous University of Mexico) during the first half of the 1970s, giving a review on some of the film publications that were produced, the work in film clubs and film collectives that emerged out of them and the cultural activities of the STEUNAM (a trade union linked to film), amongst others.

Mariano Mestman draws attention to the Rencontres Internationales pour un Nouveau Cinema (Montreal, 1974) that was, as Mestman says „probably the largest of the world’s political cinema in the 1960s and 1970s, where filmmakers from Latin America, Africa, Europe and North America came together“ and introduces an audiovisual archive of this meeting, recovered by Mestman in 2012, that present debates around Latin Americanist and Third Worldist topics, as well as heated debates on political cinema.

Artistic director and curator: Katerina Valdivia Bruch
In cooperation with: Ibero-Amerikanisches Institut and Instituto Cervantes Berlin
Funded by: Hauptstadtkulturfonds, Institut für Auslandsbeziehungen
With the support of: Embassy of Uruguay, Embassy of Chile